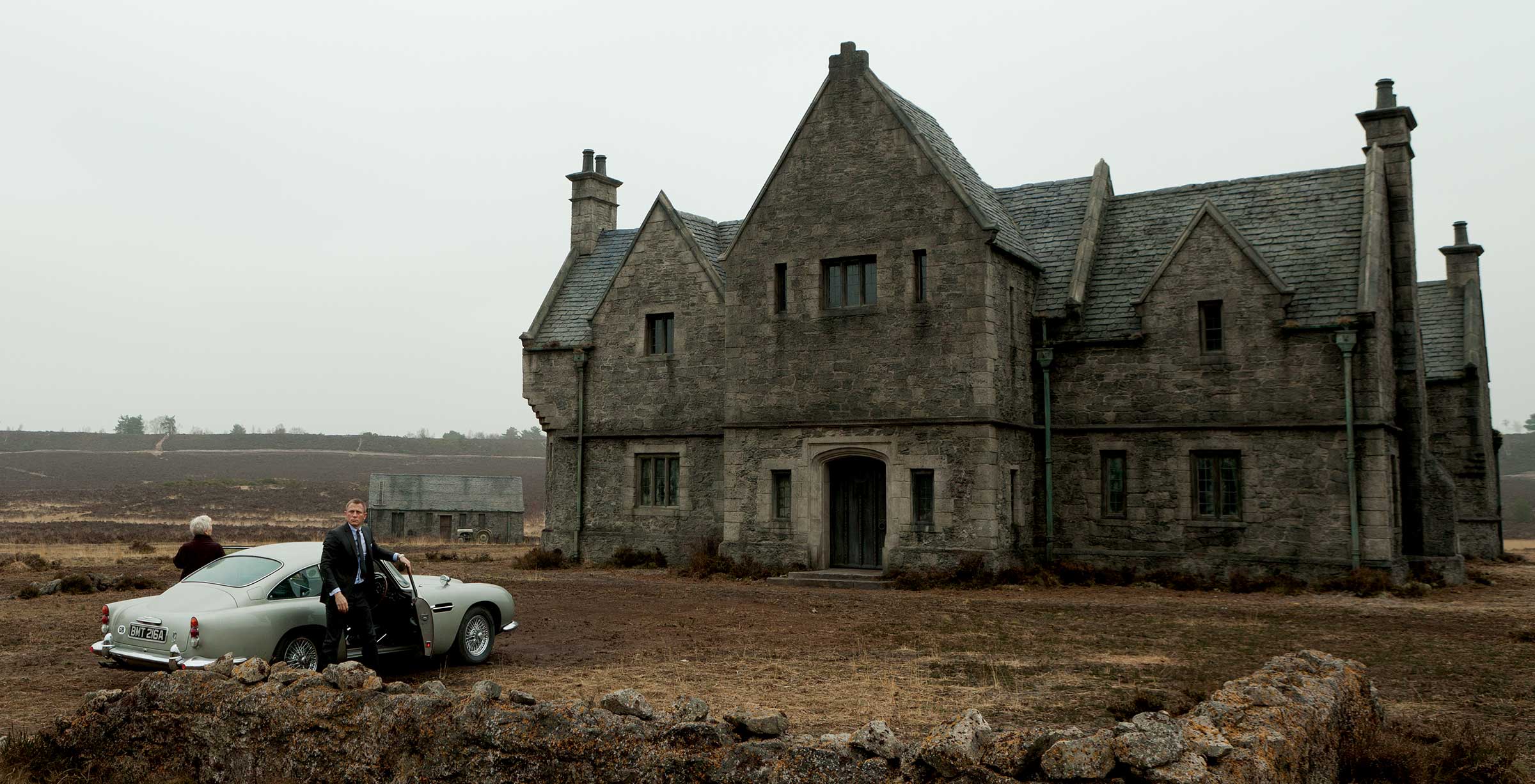 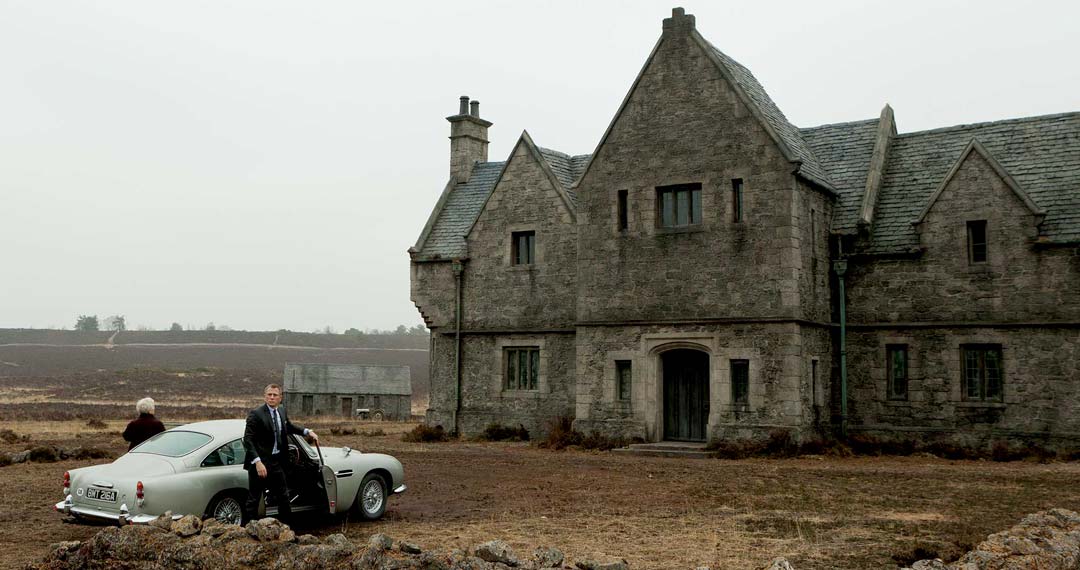 SKYFALL shattered box office records around the globe when  it premiered in October 2012. Production Designer Dennis Gassner designed sets for the film that ranged from exotic, futuristic, and post-apocalyptic to brooding and intriguing — all of which combined to play an integral role in building the mood and shaping the action that typifies James Bond films.

Shanghai: World of Mystique and Murder

Shanghai serves as the backdrop for part of the action-packed movie, filling the screen with sleek glass and steel buildings accented by colorful city lights. The modern, mysterious Shanghai scenes are heightened by Gassner’s design for a skyscraper called the Shanghai Tower and a city bar. Andrew Bennett, one of the assistant art directors who contributed to the Shanghai Tower set, used Vectorworks Designer software for his work. He modeled the square building quickly, produced elevation plans from the drawing, and subsequently built in the detail.

The Shanghai Tower was built on the famed sound stage at Pinewood Studios in Iver Heath, Buckinghamshire, 20 miles west of London. A 60’ x 50’ television screen projected a background of ethereal blue jellyfish that seemed to swim in space. A 3D design for this scene was made with Vectorworks software in just four days before smoothly transferring the model to the construction department.

The Scale Objects command worked very well for us. Vectorworks could tell me that if you stand 40 feet from a building, its windows should look like they are 60 feet away. 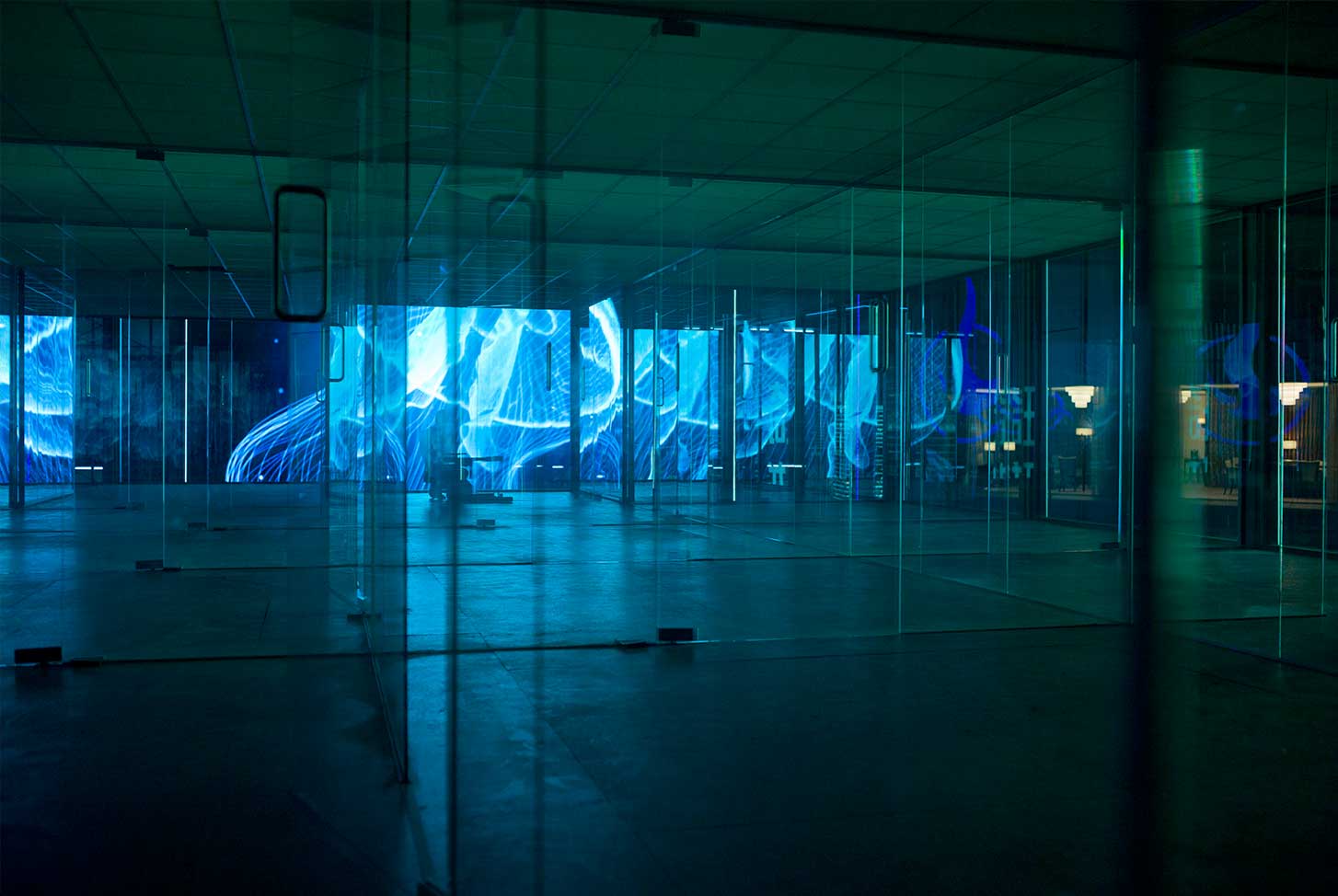 Prepping for the Close Up—Or the Far Away

Achieving correct camera perspectives is a challenge when designing this type of set. “The Scale Objects command worked very well for us,” says Bennett. “Vectorworks could tell me that if you stand 40 feet from a building, its windows should look like they are 60 feet away. We could do maps quickly, enlist the Scale Objects feature, and resize the building. It’s a good example of where we could make a one-off adjustment very quickly.”

Since the camera angle often causes the viewer to see more or less of a set than Bennett calculates, he needs to be able to adjust a room size quickly. He uses paper or card models to determine the need for resizing but says his CAD drawings show a clearer picture. “It’s very important for us to reassure the designer and director as quickly as possible that this set will work for them — and if it doesn’t, that’s the time to see it,” he says. Armed with Vectorworks drawings, Bennett can head off any production issues before they become problematic, which saves the productions time and money.

Bennett was also part of the team who worked on the London Underground set. Bennett was initially worried about working on a set with so many rounded surfaces but was thrilled with the results. “The Vectorworks program handled the curves very well, and I have more self-confidence in the software following this project,” he says. 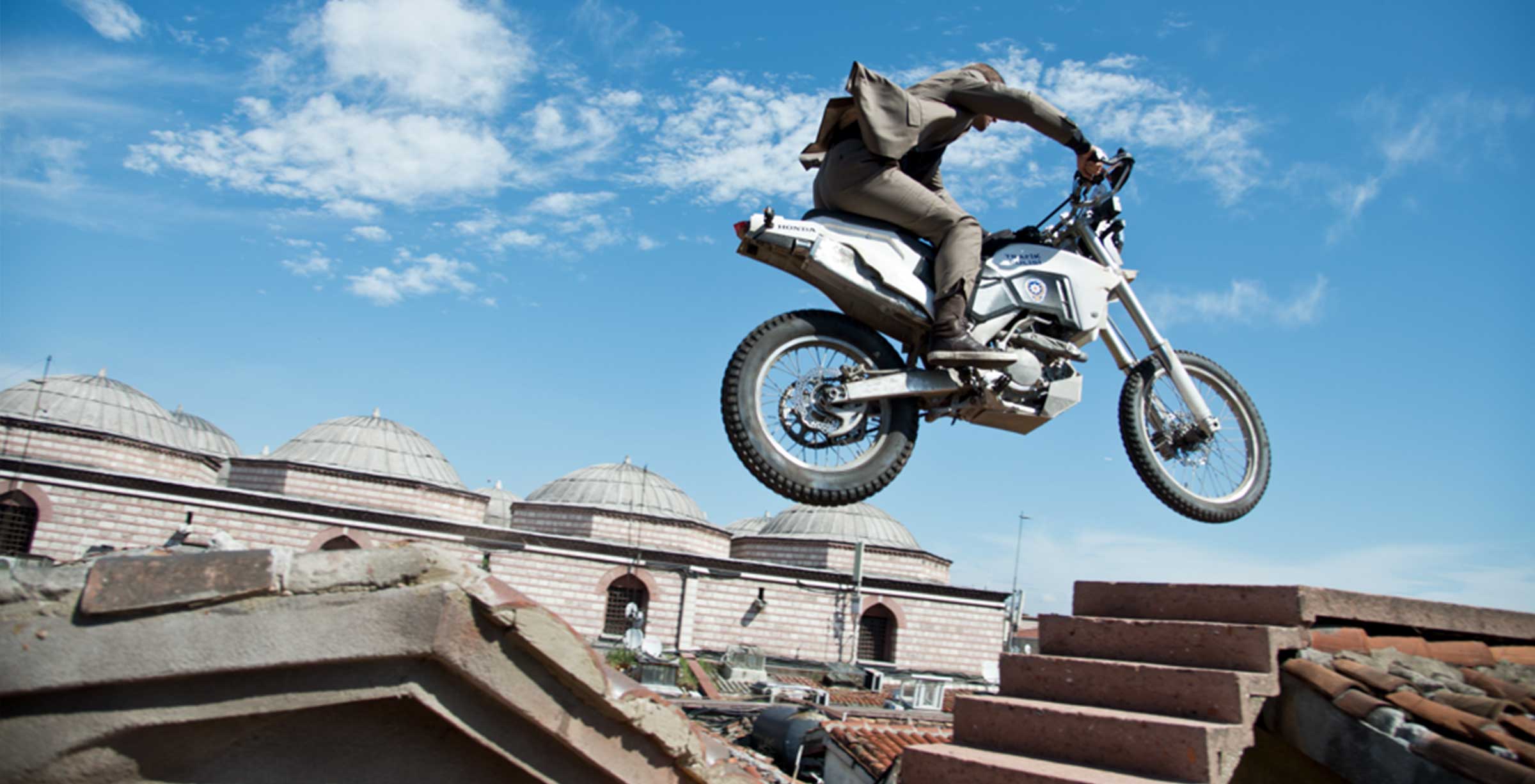 In Turkey, Art Director Neal Callow created scenes for a gravity-defying motorbike chase along the spines of narrow-tiled rooftops. The scene was filmed on site at the Grand Bazaar in Istanbul, and Callow’s goal was to create obstacles, ramps, and other aids that were to be used by the stunt team but remain completely invisible to viewers. To create the harrowing, fast-paced scene, Callow employed Vectorworks software’s drawing and scaling features, hatching, text tool, and import command.

Throughout the five-month SKYFALL project, Callow faced extremely tight deadlines. He relied heavily on Vectorworks to communicate the project quickly and clearly since the scene had to be approved by the Historical Buildings Commission of Istanbul and the Mayor and Council of Istanbul Offices. Callow also shared the drawings with the movie’s London-based director and stunt coordinator, so they had precise illustrations of the components needed on location. Thrilled to be able to operate effectively with an international team, Callow thanks Vectorworks software for helping him manage it all.

In this instance, Vectorworks allowed me to very quickly put together a blast layout schematic for the various weapons that were going  to destroy the lodge, share it with production, and make as many subsequent alterations as necessary. 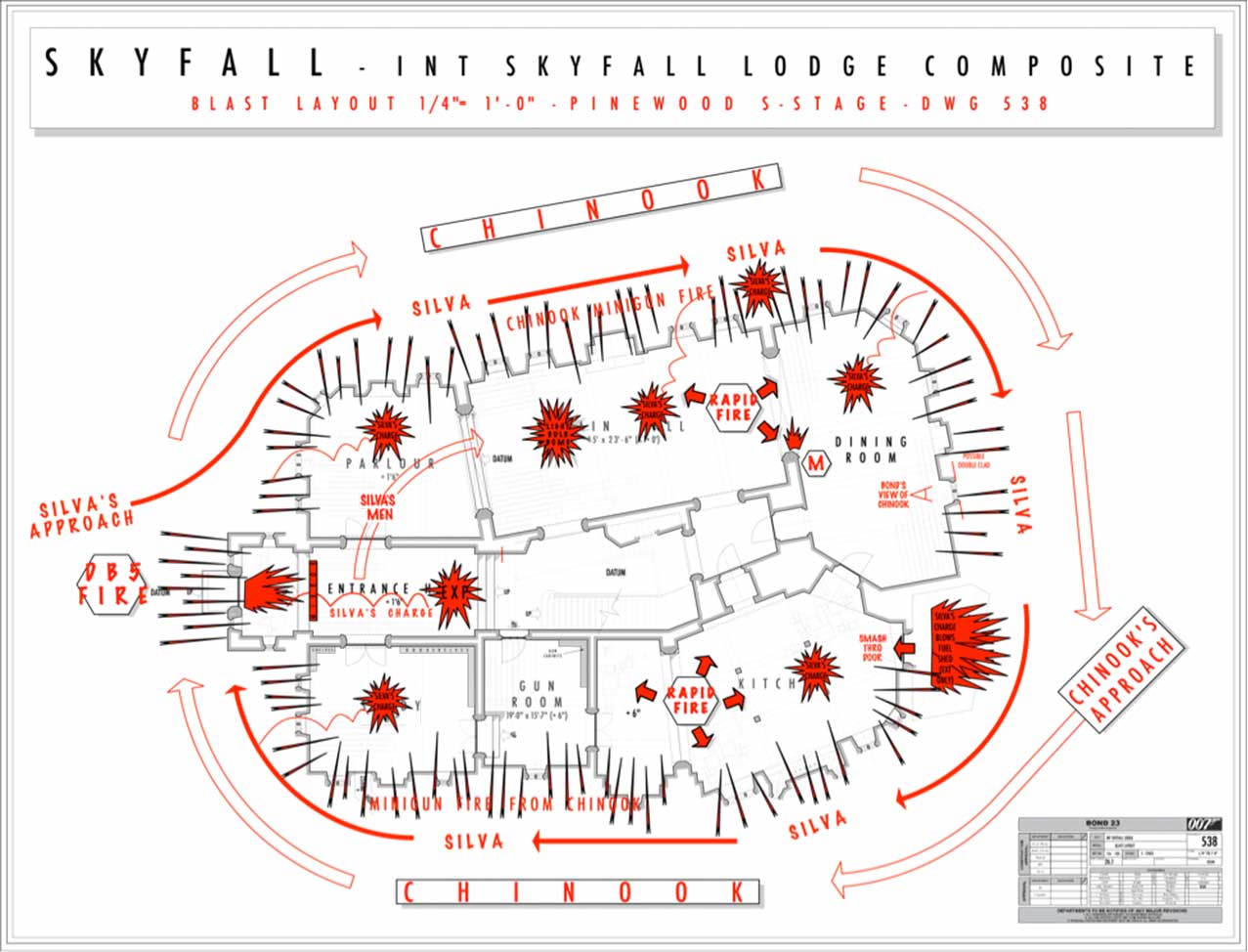 At the same time, Art Director Dean Clegg was in the UK working on Skyfall Lodge, Bond’s ancestral home. Clegg and the team helped create the scene’s chaos in the public heathland of Hankley Common in the UK.

Since a movie’s design process undergoes continual changes,  CAD software ultimately saved Clegg a great amount of time. “In this instance, Vectorworks allowed me to very quickly put together a blast layout schematic for the various weapons that were going  to destroy the lodge, share it with production, and make as many subsequent alterations as necessary,” he says. “This enabled us to isolate the specific parts of the set that needed to be prepped for special effects, making the process more efficient.”

Clegg has been using Vectorworks software since 2010. He uses the software primarily in 2D to develop and present design proposals to the production designer and director. After approval, these same drawings are shared with the other departments, including construction, camera, locations, electrical, special effects, and visual effects.

Using viewports keeps him organized. “I found it particularly liberating to throw an idea together on the design layer and keep it rough, then tighten it up on the sheet layers with the annotations,” he says. Clegg also praises the ease of transferring files among departments. Both the special effects and visual effects departments needed his designs for animation programs or other applications.

The end result? “The opportunity to look after a series of sets which make up the closing stages of a James Bond film is a great honor,” Clegg says. “And it was great fun.”