Residential Architecture and the Pathway to BIM 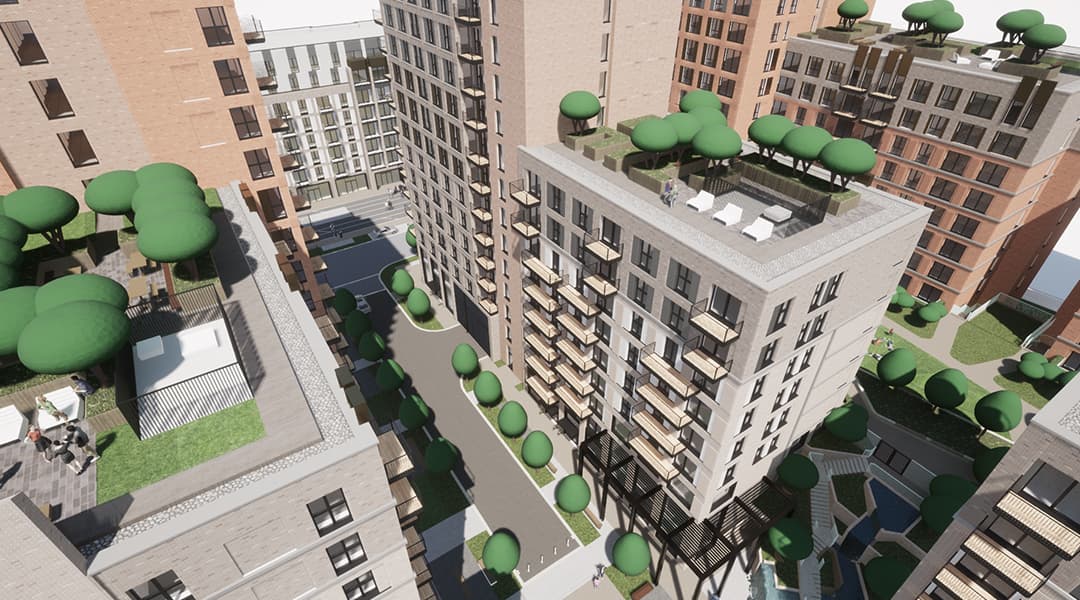 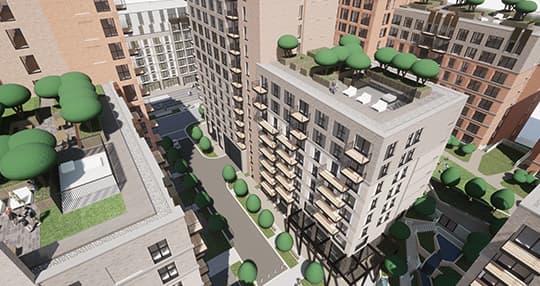 Nick Lawrence didn’t get his start in architecture. Now a Practice director who leads the BIM strategy at A&Q Partnership, originally, Lawrence actually pursued engineering in his undergraduate studies, the knowledge from which he finds helpful to his application of architectural design.

Whereas engineering can be viewed as purely technical with an emphasis on applied mathematics, architecture is a practice that’s more heavily focused on design and aesthetics — a visual art that can be interpreted by both consultants and clients. For Lawrence, these two seemingly disparate mindsets intersect with building information modeling, or BIM, which merges his technical background with architecture’s more visual nature.

“I’ve enjoyed producing technical drawings, and I think technical drawings can be useful pieces of art in their own way,” Lawrence explained of his career path, which turned towards architecture over 20 years ago. “I was looking around at getting into product design and moving away from the mathematical purity of mechanical engineering.” 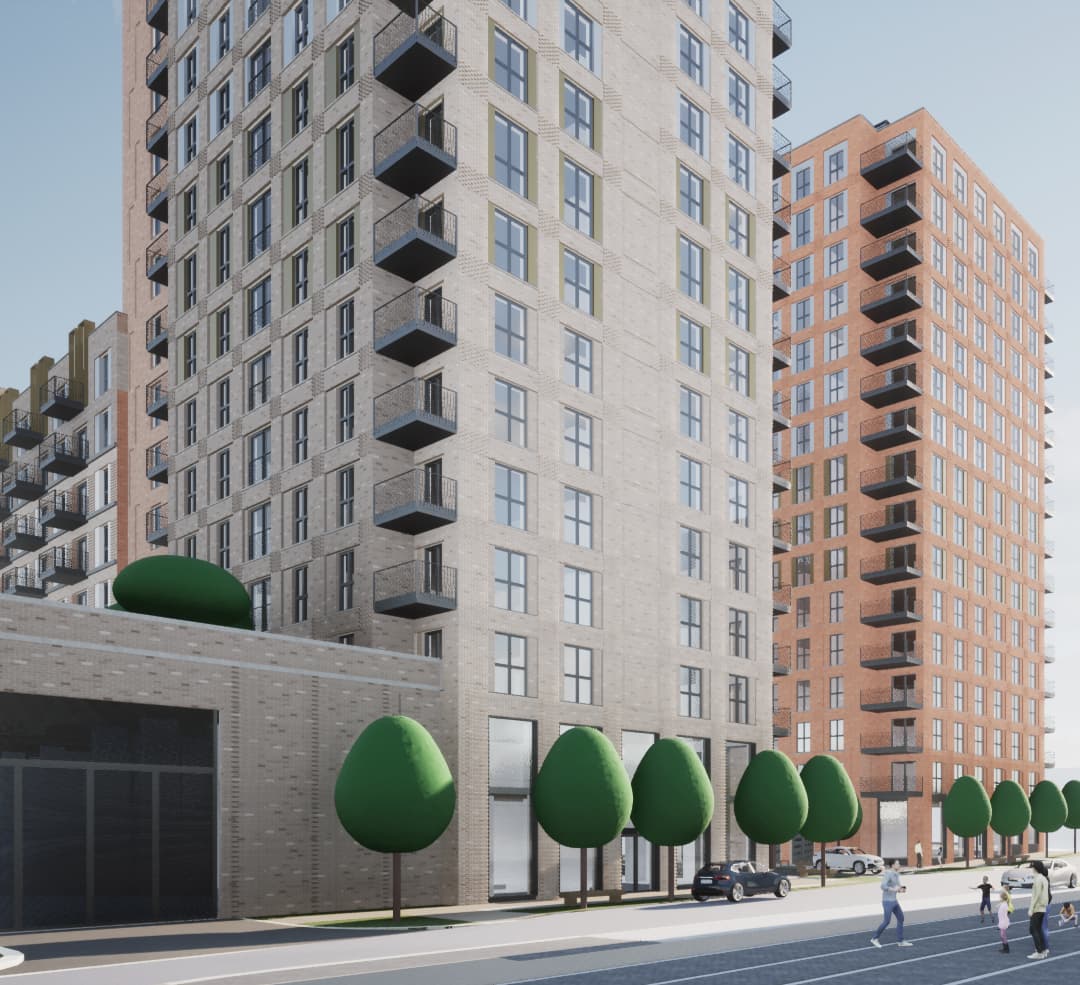 “Basically, someone took me out for lunch, sat me down, and suggested architecture was a good idea,” he said. “And looking back, I can’t really imagine what else I’d be doing at the moment. I like the artistic side of architecture, but then I also like solving technical details in construction work. It’s one of the few jobs I can think of where you can do that, you know?”

His first job with A&Q Partnership was in 1998, and after a few years running his own practice with his wife, Lawrence returned to A&Q Partnership as a director, where he’s been expounding the merits of BIM for over seven years.

Getting to Know A&Q Partnership

Founded in 1984, UK-based A&Q Partnership has around 60 staff members across four offices and is led by nine directors and six associates. They work on a variety of architectural project types, including residential, workplace, retail, hospitality, data center, banking, and mixed-use schemes. They specialize in large urban regeneration projects, though have also demonstrated capability on small developments both residential and commercial. 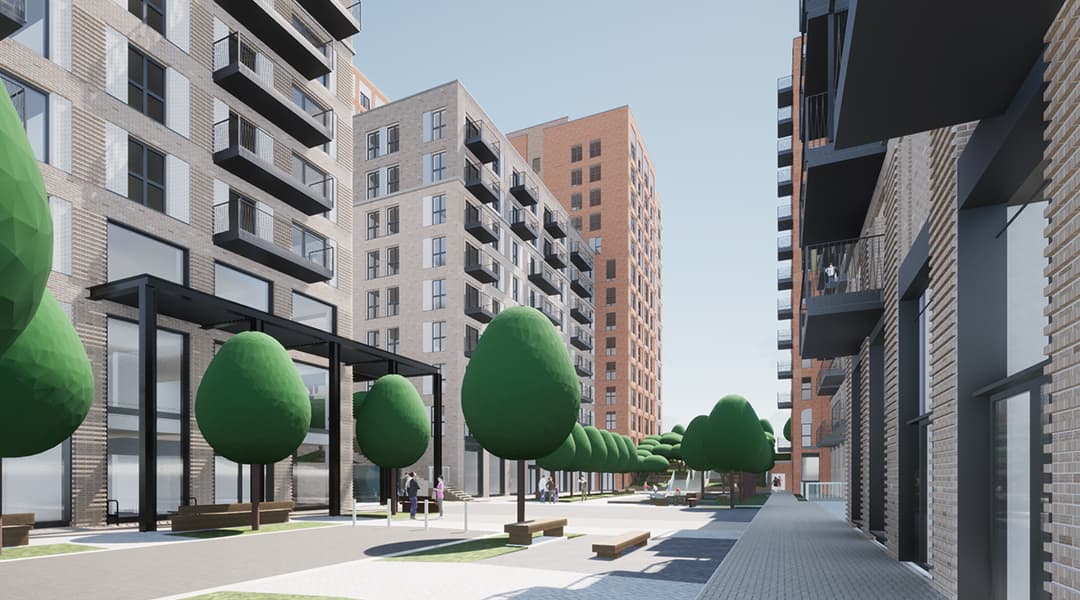 Their online portfolio includes images and a write up for the Royal Arsenal at Woolwich, the largest regeneration site in Europe at 25 acres. The development has won numerous design awards and has helped established the firm as a standout in the architecture sector.

In the UK, architecture projects are described by the Royal Institute of British Architects’, or RIBA’s ‘Plan of Works’. This outlines a strategic breakdown into seven stages, comprising:

“We take on a lot of work towards the end of Stage Two, which means that before us the concept architects on the project have already produced a proposal,” Lawrence said. “For these projects we take the scheme from a very loose concept and a set of preliminary drawings into something deliverable for design and construction. We’ve developed a reputation over the years as being a safe pair of hands to have on site and to develop technical working drawings. Certainly, most of the work that I do falls into this category.”

With offices in London, Borne End, Dorchester, and Hong Kong, A&Q Partnership can be found on Instagram @aqp_london or aqp.co.uk.

A&Q Partnership use BIM workflows on all projects, and their journey to reaching that level is in part due to Lawrence, who has been interested in BIM since before the UK government’s 2016 mandate for BIM on all publicly funded projects.

“I’ve always been quite interested in keeping up with what’s happening on a technical front,” Lawrence said. “Most of our clients are private developers so there’s no statutory requirement for us to conform to the mandate. But still, prior to 2016, BIM was on my radar as something we should be competent at, because we didn’t want to miss any jobs or contracts because of an inability there.”

This sentiment is echoed by many architects who want to avoid falling behind in the industry. Even though BIM isn’t a requirement in many areas yet, there already exists a certain pressure in the industry to incorporate smart 3D modeling and non-proprietary data management. 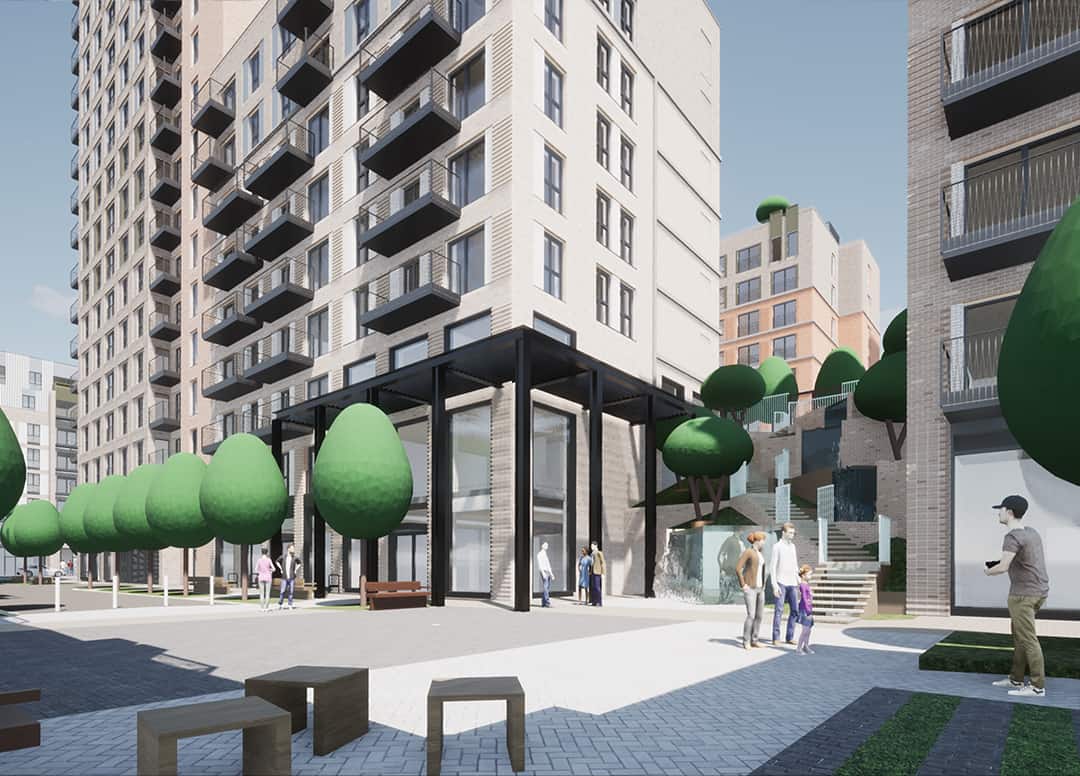 “It’s pretty evident that BIM is the next evolution in software,” Lawrence said. “There’s an inherent logic in having a 3D model and producing information from it. It feels efficient and sensible.”

With a keen sensitivity to detail, Lawrence plays a major role in training staff to office standards, particularly to their resource management system which keeps projects organized and consistent. The consistency with which A&Q Partnership applies BIM workflows to their projects means they were well prepared for a recent job, a massive 1200-unit residential project for Berkeley Homes, one of the largest housing developers in Europe.

The Eight Gardens at Watford

With claims of the project “Manhattanizing” Watford, which is just outside of London, the Eight Gardens development aims to deliver over 1,200 new homes to the area. Alongside future plans for a primary school and community amenities like a dentist’s office, the Eight Gardens development is part of a much larger modernization of the area, according to the Watford Borough Council.

Currently at Stage 3 of the RIBA’s Plan of Work, the Eight Gardens scheme sits close to Watford Junction, a large train station through which passengers can reach Central London in just 20 minutes. Lawrence said the location itself is a good development opportunity comprising two distinct phases, though as of the writing of this article A&Q Partnership is mainly working on the first phase, which solely concerns the Eight Gardens south of the Penn Road.

Made with Twinmotion, this rendered walkthrough shows what the Eight Gardens development will look like once constructed. A walkthrough animation made with Twinmotion, a Vectorworks partner. Courtesy of Nick Lawrence and A&Q Partnership.

Among the landscaped elements in the Eight Gardens project are amenity spaces and shared gardens exclusively accessed by the private residents on top of the shoulder blocks, as well as blue and green roofs on top of the towers. There are also large, publicly accessed landscaped steps and squares and streets throughout the site at ground level.

With the various consultants on the project at various levels of experience with BIM, some not as familiar with BIM workflows as A&Q Partnership, the initial appointments did not formally stipulate a BIM workflow. However, the teams were keen on developing the way they work, and so agreed to proceed as a BIM project even though it wasn’t obligatory.

“We offered that we’d develop it as a BIM job despite it not being contractually required, partly to help others in the learning process in adopting,” Lawrence said, explaining how this left them in a “slightly strange position” at the beginning of the project, charting unfamiliar territory with some parties. The team got together and set expectations for each other, then followed through with a tight execution plan. A&Q Partnership worked with the .dwg files and .ifc files by referencing them into Vectorworks. 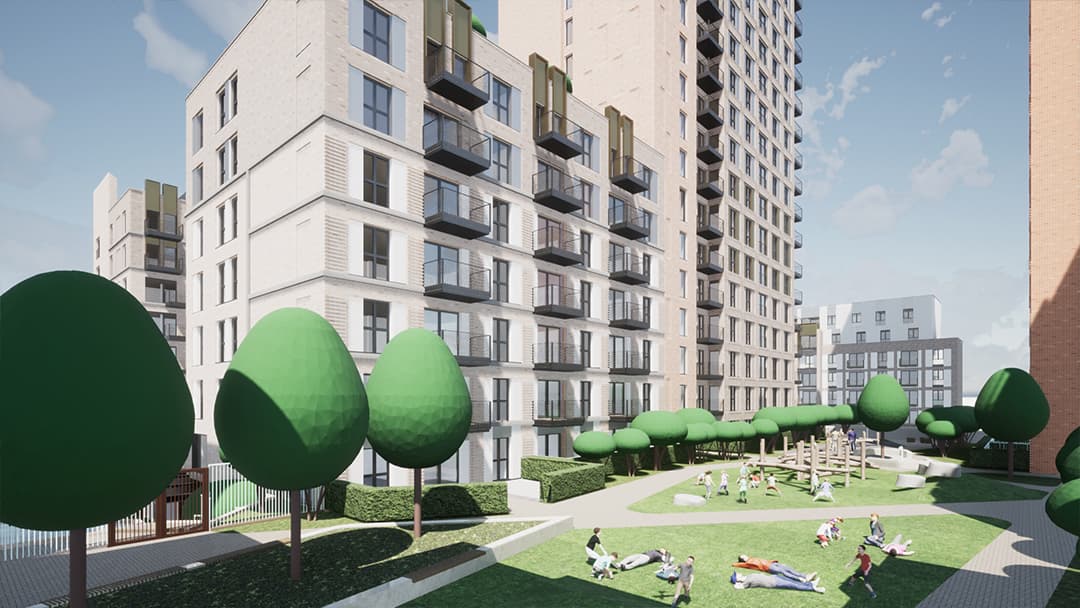 Lawrence and his co-workers at A&Q are well aware of hardware constraints for their projects — the idea that, if they were to pack a file with too much information, their devices’ computing power wouldn’t reach the level needed to work effectively. This is especially true of the Eight Gardens project, which contains multiple large buildings and a high level of detail.

A&Q Partnership relies on a multi-file method to ensure their files run properly. The project’s six buildings each had its own file separate from the master file. They referenced each building into the master file for coordination and did the majority of design work in each distinct building file. Furthermore, site-wide assets such as wall styles and window types are contained in separate "asset library files."

“For coordinating changes, you have to manage them from each building file or library file, then update the link in the master file," Lawrence said. "It means that when one person makes a change, it’s then changed across the entire suite of drawings. I think it does save us quite a lot of time and, perhaps more importantly, it controls and limits people from making changes on a whim.”

He adds that this method frontloads coordination so that when inevitable changes occur later in the design process, they’re done smoothly and without significant effort. 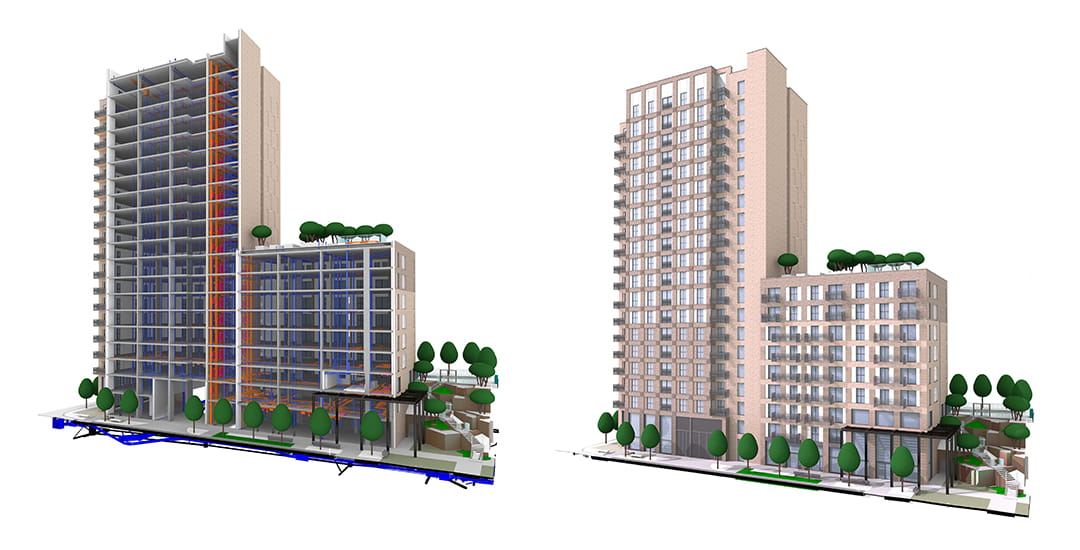 He noted that doing this allows them to limit the information they add into the master file, such that it contains only the information needed to produce coordination deliverables.

Lawrence considers this a crucial aspect of overall BIM strategy — relegating heavily detailed work to the in-progress design files, and only including necessary data in the master file.

“I think there’s a risk where people get too caught up with modeling,” he said. “It’s about understanding what needs to be modeled, what needs to be run through a clash detection process and what is actually useful to people.”

By maintaining  Asset Library Files containing  such things as façade panels, wall styles, door styles, and other details, these resources could be referenced into each individual building file, keeping detailing and architectural expression consistent with each building, a necessity for a scheme in which the buildings are intended to share an architectural language. 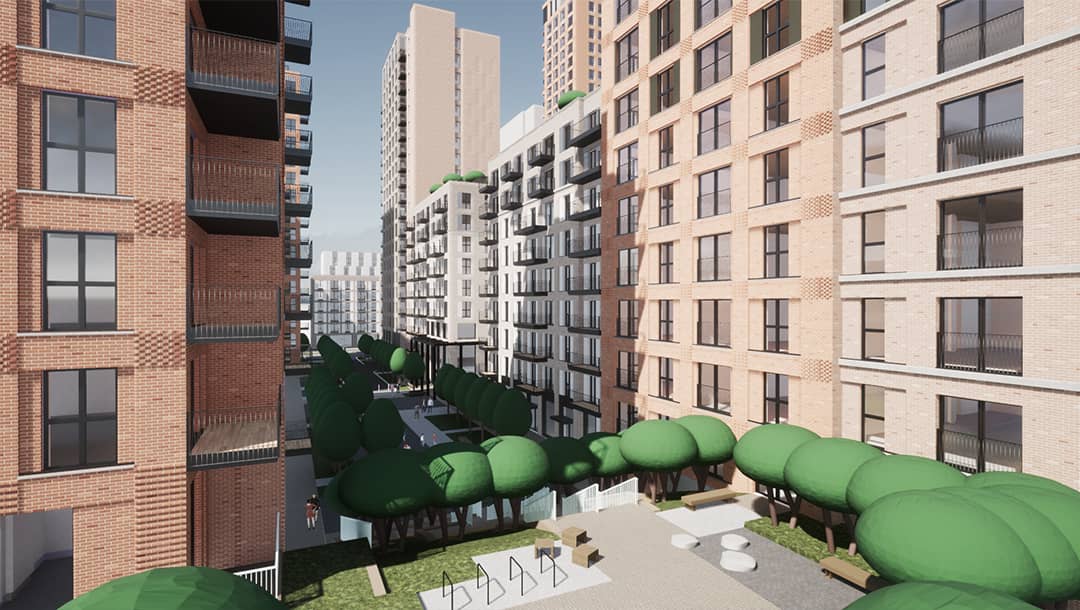 “Particularly for a job this size, it was important to have a way to control data across all of the six buildings. They’re all different buildings, but there are certain details we want to be the same across all of them,” he said.

An added challenge on big projects is that the project could span multiple years, and for A&Q it’s common for a project to be in development over several versions of Vectorworks. Strict control is vitally important in this case.

“What inevitably happens as a job moves on is you get different people coming onto the project with different abilities, different experience levels, a different knowledge of Vectorworks, and a different knowledge of architecture,” he said. “You can get input into a file that can be quite a corrupting influence on the way it was originally set up. It becomes very critical in BIM not to let that happen, especially if those files are going to be used for contracts and exchanged with consultants. You need to be quite strict on it.”

A Familiar Shift — from Hand Drawing to CAD, Then from CAD to BIM

The larger industry adoption of these BIM methods isn’t dissimilar to the shift from hand drawings to CAD about two decades ago, Lawrence said.

“I think I’ve been in the industry long enough now to see patterns repeat. About 15 to 20 years ago, the industry was moving to CAD, so we ditched the drawing boards. Back then, a lot of our consultants were using AutoCAD, and there was this sort of perception that AutoCAD was CAD. It made exchanging information with consultants challenging,” he said.

Over time, that perception faded and with a broader acceptance of .dwg files, exchanging information through various CAD programs wasn’t so difficult anymore. Lawrence believes something similar is happening again, that history is repeating itself.

“I suspect a similar outcome will happen with the adoption of IFC,” he said. “Once everyone gets used to it and gets comfortable again, we’ll be back to working normally.”

Until then, Lawrence will have to rest easy knowing he’s responsible for one of the most successful BIM applications in large architecture projects, an example for the evolution of the architecture industry at large.